It’s Saturday or better yet Sunday and you’ve been able to sleep in late. Maybe you had a hard week full of work or you were out late the night before or maybe you had a light dinner. And in the morning you wake up ravenous. What could be better than an American breakfast: pancakes, eggs and toast, bagels and cream cheese. Check out the recipes.

They are all great to satisfy that craving but the one constant you need to have is the bacon… you must have bacon…. everything is better with bacon. The smell of it frying is heavenly in the morning.

Many Italians have asked me for my pancake recipe so here it is… Christine’s pancakes. I might add you must have it with 100% maple syrup and crispy bacon. You can get real American bacon at the Esselunga in Casalecchio…Maybe a glass of OJ and a big strong cup of coffee. You can start your day like an American; full satisfied and ready for anything…. yes you can!

I love to stop in a cafè or tea shop for a hot drink when the weather turns chilly in the autumn. One of my favorites is chai. Chai is an Indian drink made of black tea that is boiled with milk, sugar and a spice mix of cardamom, cinnamon, cloves, ginger and peppercorns.

This recipe can vary in its combinations of these ingredients from family to family or from shop to shop in India. It has become popular in the U.S. and the variations on this theme are endless. Maybe chai ice cream, chai panna cotta, chai milk shake, chai butter cookies, chai spice pumpkin pie or chai pudding…

Many Indian restaurants in the West serve chai in it’s original form. which means it will be very very sweet, sometimes too sweet for me.  I have drastically reduced my in take of sugar over the last few years and I’ve tried to make chai at home with less sugar but it needs a kind of sweetness to be a good chai.

Her recipe makes about 2 cups and goes as follows:

Put 1-1/2 cups water in saucepan. Add the cinnamon, cardomom, and cloves and bring to a boil. Cover, turn heat to low and simmer for 10 minutes. Add the milk and sugar and bring to a simmer again. Throw in the tea leaves, cover, and turn off the heat. After 2 minutes, strain the tea into two cups and serve immediately.

I like to drink coconut milk and it has a natural sweetness…  so I thought, it could be used for chai and it would give the drink a new twist with the coconut flavor. See the recipe.

Black tea – an Assam or Nilgiri

a dry spice mix of ginger cinnamon, cardamom and cloves

Now if you don’t want to make the spice mix…. where in Bologna to get it? Here are some favorite tea shops where you can get the loose black tea and/or the dry spice mix.

#StregaTe via Porta Nova 7/a Bologna (tea and spices) 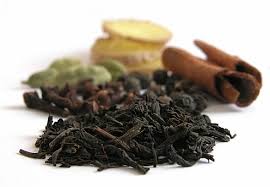 Christine: “What should we eat for breakfast?”

Odette: “Hmmm. A fresh delicious bagel, soft on the inside with a slightly crispy crust…too bad we don’t live in the States anymore where we can get bagels of all kinds 24/7.”

Christine: “If you really want to make them yourself, its not hard. You’ll need a whole afternoon and a bit of patience. Here is my recipe…”

Odette: “Recently we blogged about friselle, which though they look like bagels, are a completely different ball game.”

Christine: “Ok, so what are we going to eat this morning?”

Odette: “Well, in the meantime let’s head to Zoo on Strada Maggiore…they do a great job with fresh bagels, different kinds too.”

What did you guys eat for breakfast this morning?